Note to this digital edition 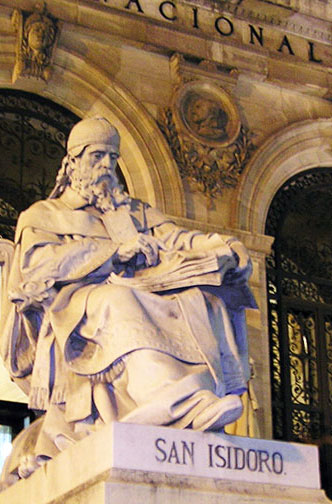 The Virtual Library of Visigothic and Mozarabic Writers takes up a project undertaken by the University of Salamanca and the Ignacio Larramendi Foundation to enhance the value, thanks to digital techniques, of the contribution to the History of Philosophy and Literature of authors from the 5th to the 9th centuries. As Ms. Lourdes Martínez and Professor Carmen Codoñer have explained, the project included most, if not all, of the authors who wrote in the early medieval centuries in Hispania, that is, Spain.

The project comes from the collaboration undertaken by Manuel C. Díaz Díaz and Ignacio Hernando de Larramendi, which began in 1998 after a visit by Don Ignacio and Don Manuel to the University of Santiago. Professor Codoñer took the baton from her teacher and the Ignacio Larramendi Foundation from which it takes its name.

The collaboration between the two institutions led to the publication of the work La Hispania visigótica y mozárabe: dos épocas en su literatura en 2010 (Visigothic and Mozarabic Hispania: two eras in its literature), as Professor Codoñer rightly states, this work is built on the following repertoires

Thus, when the Visigothic and Mozarabic Writers Virtual Library is consulted, in addition to triggering the APIS in Europeana and the DPLA, authority records are consulted which are processed in a computerised manner so that their links in the value vocabularies recover all that information accessible on the Web, so you are looking for Braulio of Zaragoza [PUT IN PICTURE] with the App developed by DIGIBIS for simultaneous interrogation of Europeana and the Digital Public Library of America (DPLA), you will obtain very rich and dynamic information, as these digital repositories are constantly being updated.

Following the methodology of the Ignacio Larramendi Foundation, an authority record has been created in MARC21 where the links of the value vocabularies on the Web have been noted, allowing bibliographic records to be browsed from all over the world, for example in Worldcat, as well as through Wikidata to Wikipedia. These authority records make up the access portal to information where the links browse either to the author's works, as well as to all the polygraph studies on this author and very noticeably to the study that the academic has dedicated to the polygraph.

Following the methodology of the Polymath Virtual Library, all the studies are identified with a Digital Object Identifier (DOI) number and the academics that have ORCID, all of which results in the visibility of the information.

Likewise, all the texts available on the Web have been added with the DIGIBIS aggregation module, which gives greater richness to the information and thanks to this, the Ignacio Larramendi Foundation is committed, following its methodological principles, to give maximum visibility on the Web to this part of Spanish History that is almost always mentioned in a few lines of text and thanks to the available technology will be accessible on the semantic Web.

The death is commemorated of Casiodoro de Reina
in 1594. Polygraph included in the Polymath Virtual Library